It's been a while again, but I want to be sure to say happy holidays to everyone who reads my blog.  I also want to participate in Michelle's latest Crusade, the goal of which was to simply get yourself in a picture.  I didn't get in front of the camera much, but I do have a picture from when I finished a project for another challenge.

My favorite shop The Queen's Ink had a contest for decorating little houses for Christmas.  Apparently the project came from the magazine Cloth Paper Scissors.  Anyway, Mom and I did one each, and mine is a little alpine gnome home.  This is how it looks all finished, with me in there for scale ;): 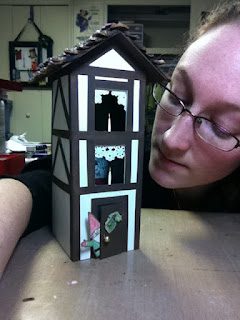 The roof has pine cone shingles and the candles in the windows are toothpicks.  The curtains are paper doilies.  And the gnome was a stamp from Paper Source.  I had so much fun putting this together!

Of course, what makes things better is the iPhone game I've been hooked on.  Cut the Rope.  If you have an iPhone, Android, or iPad, get it.  It's the cutest game ever.  It's a puzzle game, where you have to get a piece of candy from where it is dangling from a rope to a little green monster named OmNom who eats candy.  They released a holiday version for free, too, and it had a little holiday card generator where you could add OmNom to your own photos... so of course... he had to visit the gnome home. 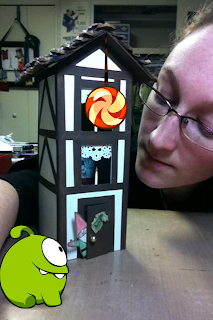 This was Mr. Pocket's and my first Christmas married.  We decorated our condo and hung stockings by the fireplace and everything.  I was trying to make him a stocking but I ran out of time, but it will be done for next year.

In another photo for the Crusade, my mother in law got me an awesome Ravens hat: 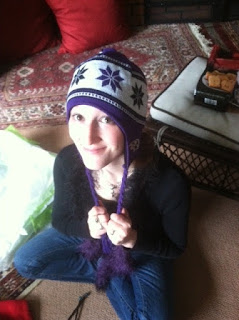 Sorry there's not much crafty stuff to show in this post.  Since the gnome home and a tag class at The Queen's Ink, I've been kind of burned out.  I did do a few Christmas tags, but the photos of them are scattered across my phone and my real camera, so I might have to post those after our weekend away for New Year's.  See you in 2012!
Posted by PocketSize at 12:16 AM

Yay Carrie made it! So fun to see you and your darling gnome home. Looks like alot of intricate nd detailed work - made with love. Hope you win! Love you in the hat too! Hope you had a wonderful first Christmas together. I think you should edit this post and throw in a few wedding photos for the crusaders who might have missed them ;) Thanks for sharing with the team. Happy New Year!

I still think your gnome home is the best! All those "timbers" you cut!!!

Cut the rope rocks! My kids got me hooked on it. So much fun how you worked that into your art!!

Great gnome home! And love the hat! Good to "see" you.

Great blog and post for the GPP Street Team. Will come back for a visit again soon.

Love the Raven's hat - what a good MIL you have. And the house you crafted is awesome. Thanks for sharing your photos.